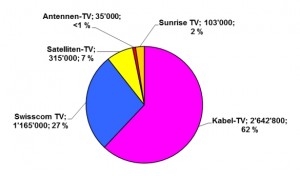 In total, 1.15 million households surfed the net through a cable subscription at the end of 2014 – an increase by 9% within one year, according to industry association Swisscable. Across the past 3 years, the growth amounts to 33%.

For classic cable television, however, the strong competition with IPTV operators showed its impact: The number of cable TV subscribers dropped by 1.8% to 2.64 million.

With a market share of 62% cable TV still remained the most-used TV reception method, though, in 2014 (see chart).

Wi-Fi 6 and Wi-Fi 6E client devices are entering the home in an unprecedented way, surpassing 50% market share since their introduction in 2019 (compared to four years for Wi-Fi 5). … END_OF_DOCUMENT_TOKEN_TO_BE_REPLACED