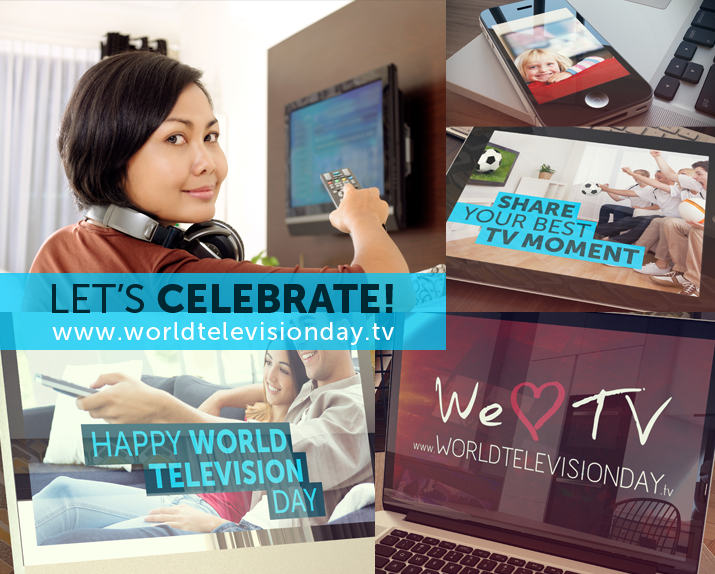 WATCH VIDEO. Television is the social medium. People watch it together, either with friends and family in the same room or in the company of their social networks online via tablets, smartphones and laptops.

To mark World Television Day on Friday, November 21, TV organisations from around Europe have brought together the latest statistics to reveal how TV and social media complement each other. The insights show how ‘multi-screening’ is becoming a mainstream activity in many countries, how TV drives commentary online and how the marriage of TV and internet-connected second screens presents opportunities for advertisers.

The research found that multi-screening now mainstream. During peaktime viewing in the UK, 74% claim to have picked up an internet connected device during TV ad breaks, with very little difference between age groups, social demographics or gender (Craft/Thinkbox ‘Screen Life: TV advertising everywhere’, 2014)

Most TV shows attract some social media commentary, but the shows which attract the most tend to be live sports and reality TV shows – the 2014 BRIT Awards in the UK saw a vast volume of Twitter conversation with 4.2 million Tweets about the show.

42% of French viewers aged 15-60 say that they have engaged with a TV programme via a social network (OmnicomMediaGroup/ Mesagraph – Social Télévision).

37% of Swiss say that it’s “normal” and “commonplace” to use the internet while watching TV (Publisuisse, ‘Media du Future 2017’).

33% of people in Poland have multi-screened and almost half of multi-screening activity (49%) is in order to look at content that is related to what is being watched (Millward Brown ‘AdReaction 2014’).

Opportunity for brands. Research in the UK has found that multi-screening in ad breaks does not affect ad recall. People who multi-screen during TV ad breaks are able to explicitly recall slightly just as many ads as the average viewer. Multi-screeners can recall two ads from the previous 15 minutes of viewing compared to the 1.9 average (Craft/Thinkbox ‘Screen Life: TV advertising everywhere’, 2014).

In Switzerland, 16% of people who multi-screen say that they are looking for additional information on brands and products that they have seen on TV (Publisuisse, Media du Future 2017).

Despite this new clear trend of multi-screening, the TV set remains the primary screen: in Germany, 86% of all video touchpoints among adults 14-59 are with live linear television. The figure is similar for 14-20s, for whom 76% is linear TV (IP Fourscreen Touchpoints, adults 14-59 / 14-25 resp.).

In the Netherlands, 65% of the time spent watching TV is spent solely watching TV, without any other activity (MediaTijd analysis 2014 by SPOT).

Thinkbox’s Screen Life: TV advertising everywhere from the UK found that TV plays a profound role within people’s homes and within the living room in particular, playing a vital role in unifying households and being a part of numerous day-to-day rituals. 98% of TV viewing in the UK takes place on a TV set, with 86% on a TV set in the living room (BARB, H1 2014).

TV drives commentary online. TV is the greatest driver of word of mouth, on- or offline. Research in the UK found that TV advertising is responsible for 51% of the conversations about brands that marketers can influence (D2D/Keller Fay/Thinkbox ‘POETIC’, 2013).

8.5% of the French (aged 15+) claim to have commented on social media about a show they were watching live on TV. Younger people are the most likely to comment online, with 15% of 15-24s having commented about a show online on social networks (L’Argus de la presse, Ipsos-Steria et Aura Mundi).

In Spain, almost 30% of users of social platforms are posting comments at least once “from time to time” about advertising they are seeing on television (Televidente 2.0, 2013).

Multi-screening benefits live TV viewing. 28% of French people say they have watched a TV show having read online comments about it. This is particularly true for under-35s, for whom the proportion is 40% (L’Argus de la presse, Ipsos-Steria et Aura Mundi, 2014).

This year’s World Television Day has seen the creation of a TV ad highlighting celebrating the power of TV with TV broadcasters across the continent running the ad. The ad includes a call to action for viewers to share their favourite TV moments on social media.

Wi-Fi 6 and Wi-Fi 6E client devices are entering the home in an unprecedented way, surpassing 50% market share since their introduction in 2019 (compared to four years for Wi-Fi 5). … END_OF_DOCUMENT_TOKEN_TO_BE_REPLACED