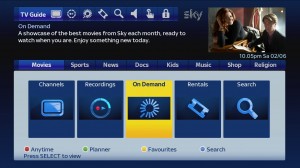 Announcing its first quarter financial results the satcaster also declared a strong start for Sky Store Buy & Keep, regularly achieving the number one or number two position among digital retailers for new release titles such as The Lego Movie and Bad Neighbours.

The biggest driver of growth for Sky Store has been the ever-increasing addressable market. There were strong performances for the movies Noah and Captain America with family titles proving particularly popular. A quarter of a million purchases have been made for “buy and keep” titles.

Despite Darroch’s comments churn remained unmoved year-on-year at 11%. However, average customer revenues added an additional £17 a year to reach £576.

Darroch added that good progress had been made with the proposed acquisition of Sky Italia and a majority stake in Sky Deutschland.

The number of On Demand downloads has more than trebled to almost 257 million in the quarter; Sky has also benefited from the current enthusiasm for box sets.

Sky has a 300-strong library with series Prison Break, The West Wing and True Blood each achieved more than 2 million views in a single month for the first time.

Wi-Fi 6 and Wi-Fi 6E client devices are entering the home in an unprecedented way, surpassing 50% market share since their introduction in 2019 (compared to four years for Wi-Fi 5). … END_OF_DOCUMENT_TOKEN_TO_BE_REPLACED