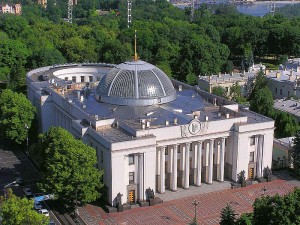 The Ukrainian parliament has approved at first reading a draft law that could have far-reaching consequences on media freedom in the country.

It has already been strongly criticised by Reporters Without Borders (RSF), which says that if adopted “would allow the National Security and Defence Council (RNBO) to suppress the dissemination of any national or international media or block any website on the grounds of protecting ‘security and national interests’ without referring to a court”.

Quoting the draft law, titled No 4453, RSF adds that “the broadcasting of television or radio stations” and “the use of Ukrainian broadcast frequencies” can be banned”. The law would also impact on the internet and printed material.

The draft law was only registered on August 8 and according to its impact study “does not require consultation with civil society”.

The RNBO is chaired by Ukraine’s president and consists of the leading cabinet ministers and the heads of the various security institutions, including the intelligence services, the armed forces and the prosecutor-general’s office.

The draft law says that sanctions can be imposed “protect security and national interests,” “Ukraine’s sovereignty and territorial integrity, and its economic independence,” to “prevent violation of the rights, freedoms and interests of Ukrainian citizens” and to “restore them.”

Sanctions would be issued in the form of a presidential decree after approval by the RNBO.

According to Johann Bihr, the head of the Reporters Without Borders Eastern Europe and Central Asia desk, “This bill’s definitive adoption would represent a major setback for freedom of information in Ukraine.

“It gives the RNBO exorbitant powers to order the broadest forms of censorship on the basis of extremely vague criteria and with no safeguards.

“We urge parliamentarians to reject this bill on second reading, as it is incompatible with the government’s obligations to protect freedoms. International conventions ratified by Ukraine stress that any restrictions on media activity must, under all circumstances, be necessary and proportionate.

“The major challenges that the Ukrainian authorities are facing and their legitimate concern to defend national security do not, under any circumstances justify such an attack on the constitutional right to freedom of expression.”

Wi-Fi 6 and Wi-Fi 6E client devices are entering the home in an unprecedented way, surpassing 50% market share since their introduction in 2019 (compared to four years for Wi-Fi 5). … END_OF_DOCUMENT_TOKEN_TO_BE_REPLACED