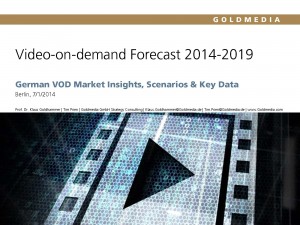 The total turnover in the German video-on-demand (VOD) market will rise to around €750 million by 2019.

With a yearly growth of around 50%, subscription offerings (S-VOD) will record the strongest growth, reports German consultancy Goldmedia in its new study Video-on-Demand Forecast 2014-2019.

20% of German internet users currently use VOD services, according to a survey Goldmedia conducted among more than 1,100 internet users. Most of them prefer free-of-charge, advertising-financed platforms like MyVideo or Clipfish. One third of VOD users have signed up for an S-VOD service such as maxdome, Watchever or Sky Snap. The rental or purchase of single movies or series has become less important.

“The competition for market shares and customers will continue to grow with the launch of Netflix later this year,” project head Tim Prien said in Berlin. “But there’s already considerable interest in VOD offerings: If the people wanting to use VOD services in future are included, we are talking about a total VOD user potential of almost one third of German internet users. That’s around 18 million people.” 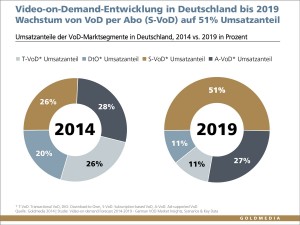 S-VOD will enjoy the strongest growth, according to the study, increasing its turnover from €71 million in 2014 to €379 million in 2019. S-VOD and A-VOD are the biggest market drivers: They will reach a combined market share of around 80% in 2019.

Wi-Fi 6 and Wi-Fi 6E client devices are entering the home in an unprecedented way, surpassing 50% market share since their introduction in 2019 (compared to four years for Wi-Fi 5). … END_OF_DOCUMENT_TOKEN_TO_BE_REPLACED