Other key findings from the report include: IP connectivity is fast becoming ubiquitous as IP-enabled CE devices accounted for 87 percent of all CE devices shipped in 2013; Global households own an average of 2.8 connected CE devices with the USA seeing the highest levels of ownership at 7.7 devices; Global retail spend on Consumer Electronics products will exceed $1 trillion for the first time in 2017; Average global retail spend per household on all Consumer Electronics products grew 2.9% in 2013 reaching $485. 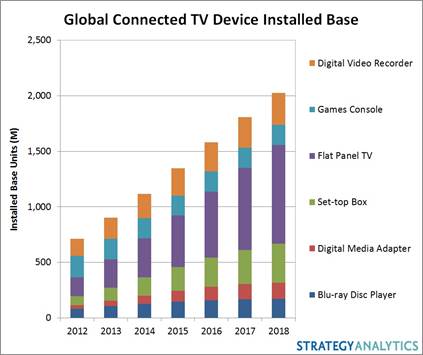 “The growth in ownership of connected TV devices is having a profound effect on the way in which people access and consume media content on the TV set,” said David Watkins, Service Director, Connected Home Devices. “Furthermore they are helping to provide opportunities for companies outside of the traditional TV industry such as Google, Apple and Amazon to compete for a share of the TV audience”.

“On a global scale, IP-enabled flat panel TVs are the most common connected TV device in living rooms today, occupying close to 30% of the installed base of such devices, a figure that is set to rise towards 50 percent by 2018,” added Eric Smith, Analyst, Connected Home Devices.

“However, that is not to say that IP-enabled TVs will necessarily become the default device that consumers use to access OTT content as there will continue to be various device options available to consumers”.

Wi-Fi 6 and Wi-Fi 6E client devices are entering the home in an unprecedented way, surpassing 50% market share since their introduction in 2019 (compared to four years for Wi-Fi 5). … END_OF_DOCUMENT_TOKEN_TO_BE_REPLACED