Tablets, especially for younger owners, are an extension of the TV viewing experience. According to the new Connected TV App Discovery Report from NPD Connected Intelligence while watching TV, 56% of US tablet owners age 18-34 use their tablet for activities related to the TV programme they are watching or for other programming related activities.

This compares to just 41% among all tablet owners age 18 and older.

The top three TV-related tablet activities among Millennials are; searching for programing to watch (34%), social media engagement related to a TV program (31%) and learning more about the program they are viewing (30%). Even more tablet owners age 18-34 say they want to use their device in conjunction with TV viewing in the future and social media is a driving factor.

Among Millennial tablet owners, 44% said they would consider using their device in the future for social media activity related to a TV program making it the number one way this age group wants to engage while watching TV.

“Millennials are advocates for TV apps,” said John Buffone, executive director, NPD Connected Intelligence. “They seek out programming in this manner and hopefully leverage it to draw in friends and family members.” 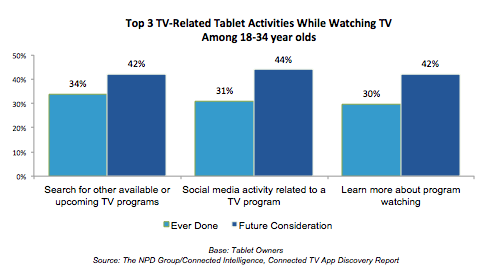 Tablets are being used as a TV companion in US internet homes where viewers are more likely to watch children’s, family, music, and premium cable networks. The networks with the greatest over-index of tablet usage as a TV companion span across these categories and are led by Nick at Nite, MTV, and Showtime.

(Base: Perform TV-related Activity on Tablet While Watching TV. Ranking is based on an index of households that use a tablet in conjunction with TV viewing vs. all viewing households. Source: The NPD Group/Connected Intelligence, Connected TV App Discovery Report)

“With the proper integration tablets can be an effective tool for increasing viewer engagement among Millennials and their broader social network,” said Buffone. “Social networking is a key strategic element in the evolution of the high-profile networks this generation is viewing. Children’s, family, music, and premium cable networks should invest in social media strategies that complements their programming and encourages viewers’ to spread the word about shows they are watching.”

Wi-Fi 6 and Wi-Fi 6E client devices are entering the home in an unprecedented way, surpassing 50% market share since their introduction in 2019 (compared to four years for Wi-Fi 5). … END_OF_DOCUMENT_TOKEN_TO_BE_REPLACED