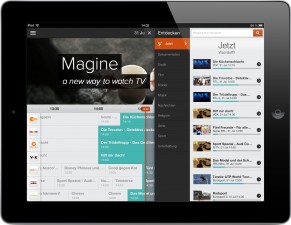 For €4.99 per month, pay-TV package Kids can be subscribed to which contains children’s channels Boomerang, Cartoon Network, Nick Junior, yourfamily and Duck TV. The package is free of charge for all users for one month.

Magine TV which has been running a beta test in Germany since summer 2013 can be used following registration on computers, laptops, tablets, smartphones (iOS and Android) and connected TV sets. Access is possible through the open internet, Wi-Fi and mobile networks.

In addition to linear live TV, single programmes can also be watched time-delayed (time-shift) or recorded (catch-up). The time-shift and catch-up features are currently available at VIVA, DMAX, Eurosport, Sport1, Nickelodeon, Bloomberg TV, Comedy Central and TLC as well as on all channels of the Kids package except Boomerang. Further channels will adopt the features soon.

With its proposition, Magine TV has chosen a different strategy than its competitor Zattoo which only offers the public channels and smaller commercial channels free of charge. For reception of the channels of the two large commercial TV groups RTL and ProSiebenSat.1, Zattoo users have to sign up for the HiQ package which costs €9.99 per month. Zattoo also inserts commercials during channel switching in the free basic offering while Magine TV refrains from additional ad insertions.

Wi-Fi 6 and Wi-Fi 6E client devices are entering the home in an unprecedented way, surpassing 50% market share since their introduction in 2019 (compared to four years for Wi-Fi 5). … END_OF_DOCUMENT_TOKEN_TO_BE_REPLACED