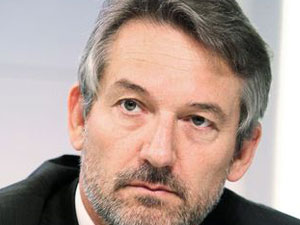 Virgin Media chief executive Tom Mockridge has been talking about the synergies between Virgin and parent Liberty Global since the company was acquired last year.

“Virgin as a subsidiary of Liberty Global is very different than as a separate company,” he told the Broadcasting Press Guild, emphasising that Virgin was very much a broadband company, against Sky that was TV centric and BT, a communications company.

“It’s about utility and the big challenge we think we’re meeting is making it as seamless as we can for the customers to get access to the breadth of choice, said the former News Corp man.

Virgin’s role was as a content aggregator that could offer Netflix over its TiVo service, Mockridge explaining the bulk of Virgin Netflix viewers were those that had previously viewed the service via tablet and mobile devices.

He also hinted that he would be interested in a similar arrangement with Amazon Prime, the former Lovefilm, saying Virgin was “Certainly open to it” and that discussions had previously taken place.

However, Mockridge was not so positive about carriage for Sky Atlantic and its HBO driven content.

“We bought BT sport because in the UK football is a popular sport. I don’t want to disrespect Sophis Turner Laing but [Sky Atlantic] is not key. We have to make a judge bet as to which segment of programming would be of benefit to our customers.”

Addressing the issue of the TiVo advanced set-top box against the Horizon units being deployed by sister company UPC, Mockridge said the two could happily sit side by side. “It’s a bit like saying virgin media is not a brand that we use in other markets.” There was no reason as to why Liberty could not support the two, or even three, different boxes. “The development and software in Horizon is being developed outside the group,.. They are not religious about it at all.”

Pointing to ever increasing broadband speeds, Mockridge said the main limitation was that Virgin over covered half the country and while the aim was currently to increase the ARPU among existing customers, expanding the footprint could only be done on a profitable business.

Wi-Fi 6 and Wi-Fi 6E client devices are entering the home in an unprecedented way, surpassing 50% market share since their introduction in 2019 (compared to four years for Wi-Fi 5). … END_OF_DOCUMENT_TOKEN_TO_BE_REPLACED