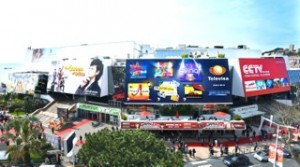 MIPTV is putting together a 4K spotlight programme at MIPTV 2014, taking place in Cannes April 7-10.

Over the last 12 months, sales of 4K sets have grown significantly. NPD DisplaySearch, in its February 2014 analysis, says 30 million screens will be sold this year. Another expert study (GfK) says that large-panel Ultra-HD sales will continue trending up as broadcasters start to create compelling and feature-rich products for consumers.

The MIPTV 4K Ultra-HD programme, created in partnership with Sony Corporation and sponsored by SES Astra, will run across the four days of MIPTV and represents the world’s first showcase of 4K content covering all entertainment genres.

The conference will kick-off on Monday April 7, with a Keynote speech by Niclas Ericson, director TV division for FIFA. This year’s FIFA World Cup in Brazil will see many of the games broadcast in 4K in Japan and South Korea.

“Sales of 4K TV sets are progressing at a rate nobody anticipated. Adoption of 4K by producers is now beginning. The MIPTV 4K programme offers a unique opportunity to understand the entire process of 4K adoption and see stunning examples of the latest 4K content,” said Chris Forrester, Executive Producer of the 4K conferences at MIPTV.

“This year’s World Cup soccer is but a start. 2016’s Olympics in Rio, and the UEFA soccer championship are expected to be the catalysts for mainstream 4K adoption by consumers. But you cannot launch a channel on the back of single events, no matter how compelling they are. The industry needs factual content, drama, music and all the other genres fulfilled in 4K,” he added.

Mike Gunton, the BBC’s creative director at its Natural History Unit, speaking at last year’s MIPTV said simply: “Any high-end project will be shot in 4K from now on. There are lots of interesting commercial elements to this too as we’re starting to do theatrical and giant-screen presentations. Plus, if you’ve shot in 4K, you’re future-proofing.”

Wi-Fi 6 and Wi-Fi 6E client devices are entering the home in an unprecedented way, surpassing 50% market share since their introduction in 2019 (compared to four years for Wi-Fi 5). … END_OF_DOCUMENT_TOKEN_TO_BE_REPLACED