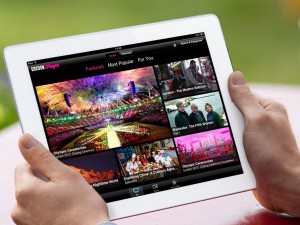 The BBC iPlayer gained a record three billion programme requests in 2013, an increase on 33% on 2012, as demand for VOD services showed no signs of abating.

Although PCs remained the biggest single platform for requests in 2013,  an average of 43 per cent of requests each month, December saw mobile and tablet requests overtake PC requests for the first time in iPlayer’s history.

Victoria Jaye, Head of TV Content for BBC iPlayer, says: “2013 has been a fantastic year for iPlayer. We’ve begun the journey to transform iPlayer from a TV catch-up service into an online TV destination in its own right with the introduction of iPlayer exclusive content and programme premiering. We’re delighted by the audience response to both. As we move into 2014, we will originate more exclusive programmes for iPlayer, as well as offer an ambitious range of content to complement our biggest brands and events.”

December’s increase in tablet usage, though no doubt impacted by people being away from their offices, potentially shows a longer term trend. There was a 104% increase year on year in BBC iPlayer requests from tablets; 20 per cent of total TV and radio iPlayer requests in December from tablet; and downloads of the BBC iPlayer mobile app hitting over 20m, with 942,000 downloads over the festive period alone

Top BBC iPlayer TV programmes in 2013 included Top Gear, which made up 10 of the top 20 programmes. Doctor Who, Miranda, The Voice UK and Africa also made the rest of the top 20, along with the film Madagascar. The top radio programmes were dominated by live sports coverage, with the Ashes proving hugely popular, constituting 19 of the top 20 shows requested.

Wi-Fi 6 and Wi-Fi 6E client devices are entering the home in an unprecedented way, surpassing 50% market share since their introduction in 2019 (compared to four years for Wi-Fi 5). … END_OF_DOCUMENT_TOKEN_TO_BE_REPLACED