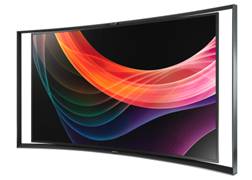 Samsung is launching its first ever curved OLED TV (S9C) in Europe this September promising a “true cinematic viewing experience”.

The Samsung S9C is the first TV to feature Multi View capabilities meaning two people can watch completely different full-screen full-HD content, even in 3D, on the same display with corresponding audio and controls. This innovative Multi View feature is like having two TV’s in one and is enabled by Samsung’s 3D Active glasses.

The curved OLED set comes with a so-called Connection box, which allows for a single cable for all connections, this reducing clutter. The box also serves as an Evolution Kit, allowing upgrades of the TV set in years to come.

The TV set is now available for ordering in Europe with the first sets to be delivered in the first week of September. Retail price in Europe is set at EUR7,999.00

Wi-Fi 6 and Wi-Fi 6E client devices are entering the home in an unprecedented way, surpassing 50% market share since their introduction in 2019 (compared to four years for Wi-Fi 5). … END_OF_DOCUMENT_TOKEN_TO_BE_REPLACED