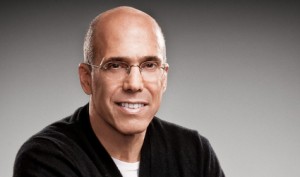 Jeffrey Katzenberg, CEO of DreamWorks Animation, has been named MIPCOM 2013 Personality of the Year.

Jeffrey Katzenberg will accept the award on Wednesday October 9, during a gala dinner for industry executives at the Carlton Hotel in Cannes. The same day, he will address the MIPCOM audience in the Palais des Festival’s Grand Auditorium and share his unique perspectives on the television business as part of MIPCOM’s Media Mastermind series of presentations.

In 1994, along with Steven Spielberg and David Geffen, Jeffrey Katzenberg co-founded DreamWorks SKG. Since 2004, DreamWorks Animation has been a publicly-traded company; under Katzenberg’s leadership, it has become the largest animation studio in the world, releasing 27 animated feature films to date. Prior to co-founding DreamWorks, Katzenberg served as Chairman of The Walt Disney Studios, as well as President of Paramount Studios.

Reed MIDEM CEO Paul Zilk said in a statement: “Jeffrey Katzenberg’s outstanding impact on the entertainment industry is internationally recognised, as he has brought exceptional films, both live-action and animation, to millions of people around the world. The acquisitions of Classic Media and AwesomenessTV, the recent groundbreaking deals with companies including Netflix and Super RTL, and DreamWork Animation’s continuing expansion into the television world, all demonstrate his clear vision of the future of entertainment.”

Zilk added: “We are honoured to welcome Jeffrey Katzenberg to Cannes as the MIPCOM 2013 Personality of the Year.”

Wi-Fi 6 and Wi-Fi 6E client devices are entering the home in an unprecedented way, surpassing 50% market share since their introduction in 2019 (compared to four years for Wi-Fi 5). … END_OF_DOCUMENT_TOKEN_TO_BE_REPLACED