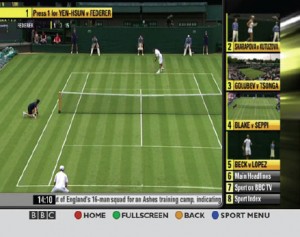 As Wimbledon enters its second week, the BBC has confirmed it will screen the climax of the tennis championships in the 3D format.

The broadcasts are being made as part of the BBC’s two-year trial experimenting with 3D production and distribution. Previous 3D broadcasts have been carried on the BBC HD channel, but with the channel being replaced by an HD simulcast of BBC Two, coverage will instead be seen via the Red Button

Kim Shillinglaw, Head of BBC 3D, says: “We’re delighted to provide live 3D coverage from the biggest matches of this year’s Wimbledon. Major UK sporting events are a big part of our trials with 3D content and this allows us to build on our work from previous Wimbledon Championships and the London 2012 Olympics.”

The relatively late announcement – there were no details when the BBC released details of an extensive digital offering around Wimbledon – comes as 3D faces new commercial pressures.

In June ESPN has announced it is discontinuing its US ESPN 3D at the end of the year.

Wi-Fi 6 and Wi-Fi 6E client devices are entering the home in an unprecedented way, surpassing 50% market share since their introduction in 2019 (compared to four years for Wi-Fi 5). … END_OF_DOCUMENT_TOKEN_TO_BE_REPLACED