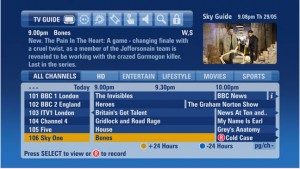 A study into the potential impact of an EPG shift for commercial broadcasters ITV and Channel 5 has concluded that while ITV the difference is negligible, for Channel 5 the share of viewing could drop by as much as 24%.

An Analysis of the Audience Impact of Page One EPG Prominence by By Dr Farid El-Husseini on behalf of the regulator Ofcom studied 29 EPG reshuffles across Freeview, Sky and Virgin Media, on either side of the move and their impact on audiences.

One of the major benefits to broadcasters with public service responsibilities is their EPG position.

Dr El-Husseini developed a number of scenarios through an algorithm designed to take account of the extent to which the uniqueness of the content and overall brand strength of ITV and Channel 5 are likely to mitigate the viewing impact of a significant move down the EPG.

The methodology is based on comparing the daily channel shares in the six weeks before and after an EPG change takes place. Other structural factors, such as significant scheduling changes, or the launch of a competing channel or programme were also taken into account.

“The evidence strongly supports the view that EPG positioning is likely to have a significant impact on a channel’s performance. Based on this evidence, we consider that if a major digital entertainment channel suffered a significant loss of EPG prominence, this would be associated with a 10-20% drop in audience Share on the Freeview platform and a 20-40% fall in audience Share on the Sky and Virgin Media platforms,” said Dr El-Husseini.

Wi-Fi 6 and Wi-Fi 6E client devices are entering the home in an unprecedented way, surpassing 50% market share since their introduction in 2019 (compared to four years for Wi-Fi 5). … END_OF_DOCUMENT_TOKEN_TO_BE_REPLACED