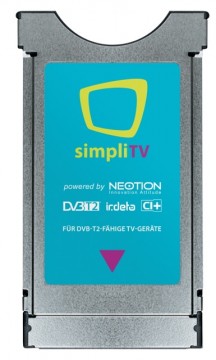 Simpli TV is the name of a new bouquet of encrypted DTT channels that will go on air in Austria on April 15.

ORS, the transmitter company, which is owned by public broadcaster ORF and the Raiffeisen bank, will operate the service using the DVB-T2 standard with rdeto encryption.

The new bouquet will be available on subscription only alongside the current offer of free-to-air DVB-T channels from ORF. ORS will reveal fuill details of the service at a press conference in mid-April, just before the launch of SimpliTV.

According to Austrian press reports, the monthly fee will be around EUR10. The service will be rolled out gradually across the country as new transmitters come on the air.

Compatible DVB-T2 receivers will be in the shops from mid-April (see picture below). There will also be CI+ modules available (see picture above).

ORS is aiming for a market share of 12% for digital terrestrial reception.

Simpli TV will be composed of public broadcaster ORF, but also channels from the private broadcasters RTL and ProSiebenSat.1.

Other channels will include Servus TV, Arte, Bayern Alpha, and even Playboy TV. A total of 40 channels is envisaged, including a number of HD channels such as Sat 1 HD, Pro Sieben HD, RTL HD and Vox HD.

Austria completed digital switchover on June 7, 2011. All current transmissions are in the DVB-T standard, with a DVB-T2 pilot in Vienna going on.

Wi-Fi 6 and Wi-Fi 6E client devices are entering the home in an unprecedented way, surpassing 50% market share since their introduction in 2019 (compared to four years for Wi-Fi 5). … END_OF_DOCUMENT_TOKEN_TO_BE_REPLACED