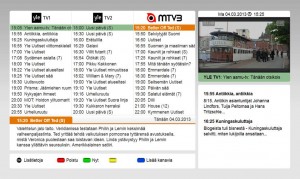 “Television sets have evolved and TV watching habits have also changed rapidly. The HbbTV standard makes it possible to enrich and widen the TV content. In Germany, the standard is are already heavily used, and its popularity is growing. Digita now provides broadcasters the opportunity to make it also available in Finland.”

Sofia Digital’s CEO Ari Pöyhtäri added: “Sofia Digital has been pioneering enhanced TV services for over ten years and the HbbTV launch with Digita is a significant milestone in Finnish digital TV’s history. Hybrid services with HbbTV technology seems to be a promising platform to implement Internet-based services with TV broadcasts and it has wide support among all biggest TV manufacturers.”

The first phase of HbbTV in the country is now introduced with Sofia Digital, who developed an extended programme guide. The EPG is now available on the YLE, MTV MEDIA, Nelonen, SBS and FOX channels. In total HbbTV services are offered on four DTTV multiplexes and on 14 different TV-services.

Wi-Fi 6 and Wi-Fi 6E client devices are entering the home in an unprecedented way, surpassing 50% market share since their introduction in 2019 (compared to four years for Wi-Fi 5). … END_OF_DOCUMENT_TOKEN_TO_BE_REPLACED