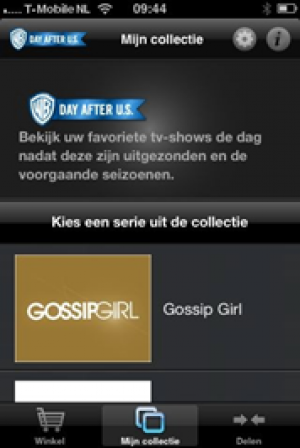 Warner Home Video has launched its Day after US app, which allows access to episodes of US TV series the day after initial broadcast.

Warner has launched the app because the iTunes store for The Netherlands and Belgium does not offer the possibility to buy single episodes from TV series. This app makes such purchases possible.

The app is available for free and people who download it receive the first episode of series for free. The second episode will also be free to those who tell their friends on Facebook that they downloaded the Day after US app.

Wi-Fi 6 and Wi-Fi 6E client devices are entering the home in an unprecedented way, surpassing 50% market share since their introduction in 2019 (compared to four years for Wi-Fi 5). … END_OF_DOCUMENT_TOKEN_TO_BE_REPLACED