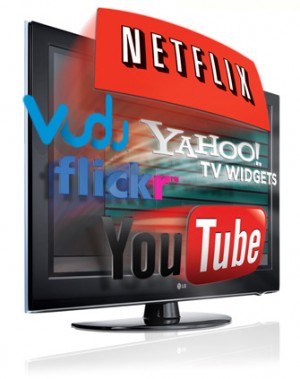 The number of US consumers currently accessing the internet through their TV sets is on the rise and will continue to grow dramatically in the year ahead, according to a consumer study conducted by Frank N. Magid Associates in late March 2012.

The research, conducted as part of the Magid Media Futures 2012 study, found that 21% of consumers connect to the internet via their TVs in comparison to 16% last year. They use the connected TV for web browsing, viewing videos through subscription services such as Netflix, online gaming and visiting Facebook, in addition to other Web services and content.

Game consoles (e.g. Nintendo Wii, PlayStation 3 and Xbox 360) are the primary means of connecting to the internet via TV, followed by smart TVs, Blu-Ray players, and over the top devices (e.g. Roku, Apple TV, Google TV). Early adopters are more likely to be male (56% male vs. 44% female) with more than half of the adopters between the ages of 18-44.

The number of consumers accessing the internet via their TVs will continue to grow, as 30% of consumers who do not currently access the internet through TV say they are interested in doing so. These potential subsequent adopters also skew male (58% male vs. 42% female) and tend to be slightly older than current users – ages 25-54.

Wi-Fi 6 and Wi-Fi 6E client devices are entering the home in an unprecedented way, surpassing 50% market share since their introduction in 2019 (compared to four years for Wi-Fi 5). … END_OF_DOCUMENT_TOKEN_TO_BE_REPLACED