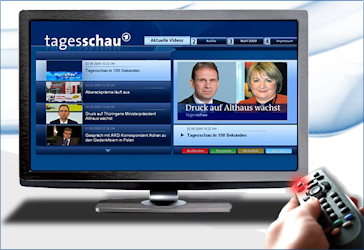 Huge impetus was given to rollout late last year when 20 EBU members including RAI (Italy); RTVE (Spain); YLE (Finland); RTBF (Belgium) and NRK (Norway) agreed to deploy HbbTV services in 2012 and to establish a common market for hybrid television applications.

EBU Director General Ingrid Deltenre said; “Underlying this co-operation is the shared conviction that only high quality creative content can breathe life into the promise of hybrid technology – and only a flexible, cross-border approach will make it happen quickly.”

To encourage consumer take-up, the EBU is offering white-label HbbTV applications free of charge for its members to customise and deploy interactive services during the Olympics, when audiences peak.

Germany has a wide range of HbbTV services and receivers and French broadcasters have trials of HbbTV platform TNT 2.0 under way. Other activity includes a year-long pilot by Danish national broadcaster DR; Dutch broadcasters (SBS, NPO and RTL) are aligning in a choice of HbbTV as their standard for hybrid connectivity; Spanish broadcasters TVE and Telefonica are developing an HbbTV project and there are forthcoming launches announced for Switzerland, Austria the Czech Republic and Poland.

The UK situation is more complex with a strong Freeview platform using MHEG and the imminent YouView launch with a proprietary Flash-based implementation.

What is noticeable is that interest is being received from free and commercial operators. Growth is being partly driven by the desire to standardise on the delivery of content and the tools that can be used to manage them. A neutral platform allows operators to increase the range of set-top box vendors that can supply them and allows them to bring much of the specification of the product back in-house.

Interest is also spreading overseas. HbbTV is being considered in the US, Japan, Australia, China, Singapore and Malaysia where the imminent terrestrial DVB-T2 roll-out has specified HbbTV.

Version 1.5 of the HbbTV specification provides the basis for OTT and multi-platform service delivery. It adds support for HTTP adaptive streaming based on the MPEG DASH standard for an improved viewing experience. It also adds support for improved access to EPG data, enabling broadcasters to produce full seven-day EPGs and manufacturers to build EPGs using HTML for deployment across a range of receivers.

The specification also supports multiple DRMs with a common encryption, and is a major step in making CTVs useful devices for pay-TV services and VOD.

Future rollout is not without its challenges. Not least is the issue highlighted by Deltenre which is the trick in harmonising different approaches and different speeds of adoption across borders.

Although the HbbTV Consortia has a wide range of manufacturers on board including ANT Software, Access, Sony and Humax, the control and maintenance of the security of hundreds of different devices running HbbTV applications will be a challenge.

Work must also be done to build Red Button applications and portals for connected TV which are simple to use for the consumer. Application developers and manufacturers will need to focus on the quality of their apps, rather than the quantity.

Make sure you receive an update on HbbTV’s exciting progress at the IBC2012 Conference which devotes sessions to the issues impacting manufacturers and broadcasters faced with OTT service provision and sessions examining ways to approach application development for Connected TV.

Wi-Fi 6 and Wi-Fi 6E client devices are entering the home in an unprecedented way, surpassing 50% market share since their introduction in 2019 (compared to four years for Wi-Fi 5). … END_OF_DOCUMENT_TOKEN_TO_BE_REPLACED