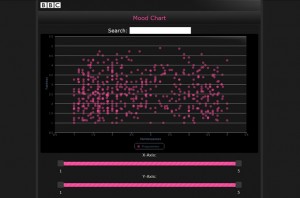 BBC Research & Development is studying how content discovery can be developed to help viewers find the shows best suited to their mood.

The Multimedia Classification project, part of Archives Research, is looking at the best way that 75 years of BBC content can be listed. Research engineer Rosie Campbell says that with such depth of content, searching for ‘Comedy’ is not going to get the viewer very far, though says searching by mood is more likely to augment current methods rather than replace them.

“The classification system automatically analyses programmes for a range of different video and audio features, such as luminosity, laughter and motion. The results of this are then used to assign each programme a rating on a set of mood scales. For example, a programme with a high level of motion but not much laughter might score 5/5 on the ‘slow-moving to fast-paced scale’, but 1/5 on the ‘serious to humorous’ scale, meaning it is quick but not very funny (a thrilling drama for instance),” explains Campbell.

Through the system it is possible for programmes to be compared, based on their mood scores, for example, searching for a show ‘more exciting than Spooks’.

A prototype interface has been developed using a 2-dimensional scatter chart, with each axis representing one mood scale. This has led to a prototype system using the Universal Control API which allows users to view a dynamic graph of mood data on a second screen (such as a tablet PC or smart phone) that moves along in sync with a programme on a set-top box.

Wi-Fi 6 and Wi-Fi 6E client devices are entering the home in an unprecedented way, surpassing 50% market share since their introduction in 2019 (compared to four years for Wi-Fi 5). … END_OF_DOCUMENT_TOKEN_TO_BE_REPLACED