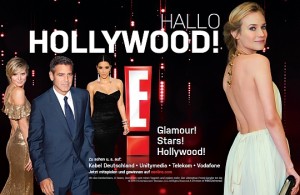 The channel is available on a number of platforms, including cablers Kabel Deutschland and Unitymedia and IPTV operators Vodafone and Deutsche Telekom. However, there is availability on the Sky D satellite DTH service.

The 24-hour channel is now completely available with German versioning. Apart from original programming from the US, the channel also promises to bring locally produced programmes.

The channel will continue to cooperate with the ProSieben magazine programme Red! Stars, Lifestyle & More, as well as with movie channel Tele 5.

E!Entertainment was launched in the US in 1991 and is distributed in 150 countries worldwide. It is part of Universal Networks International.

Wi-Fi 6 and Wi-Fi 6E client devices are entering the home in an unprecedented way, surpassing 50% market share since their introduction in 2019 (compared to four years for Wi-Fi 5). … END_OF_DOCUMENT_TOKEN_TO_BE_REPLACED