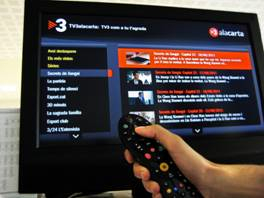 The Spanish cable operator Ono has announced that its new TiVo service will be officially launched this October.

According to Guillermo Mercader, Ono’s DG of residential services, it will cost €10 a month for households that have access to the operator’s next generation network and broadband service.

TiVo, which will initially be available in Madrid and Barcelona and subsequently rolled out to other parts of Spain, will have 12 HD channels.

Also included will be Videoclub ONO, with over 2,700 hours of new releases and free, HD and 3D content.

Alongside the launch date of TiVo, Ono has also announced that its fibre optic network is now ready to provide internet access at up to 100 Mbps (download) and 10 Mbps (upload) to 7 million homes.

Investment in the network already stands at over €9 billion and an additional €150 million has been earmarked for the deployment of DOCSIS 3.0 and development of TiVo.

(The picture shows the TV3alacarta app, an on-demand video service from Televisió de Catalunya which is accessible with TiVo)

Wi-Fi 6 and Wi-Fi 6E client devices are entering the home in an unprecedented way, surpassing 50% market share since their introduction in 2019 (compared to four years for Wi-Fi 5). … END_OF_DOCUMENT_TOKEN_TO_BE_REPLACED