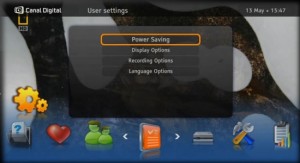 Canal Digital is to introduce a new mid-market receiver in all four of its territories from September 1. The new ADB TRN 5720SX features a twin satellite tuner, IP connectivity, and the option of a USB DTT tuner to bring in terrestrial transmissions. It has been specially adapted for Canal Digital with the addition of iPad and iPhone connectivity.

ADB has successfully implemented MHP in other markets, but its star is beginning to wane in favour of HbbTV. The Nordig organisation, which decides on which standards should be adopted in the Nordic countries, is said to be actively considering the hybrid technology.

The ADB launch comes ahead of Canal Digital’s previously announced plans for a TiVo product. Patrick Hofbauer, CEO & SVP Canal Digital AS, said the new addition remained a part of the satcaster’s plans and would be aimed at a higher market segment. “TiVo has a longer product timeline and is a much more advanced product, so ADB will come now and TiVo later.”

Canal Digital’s new receiver will include access to Canal Digital Go, the new on demand portal launched earlier this year, and which already has access to around 500 movies.

Wi-Fi 6 and Wi-Fi 6E client devices are entering the home in an unprecedented way, surpassing 50% market share since their introduction in 2019 (compared to four years for Wi-Fi 5). … END_OF_DOCUMENT_TOKEN_TO_BE_REPLACED