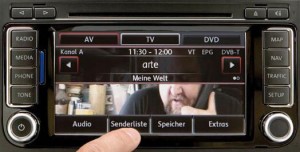 The first tests have been carried out in Germany using DVB-T ‘handover’ technology facilitating mobile TV reception in cars and on the move. The results of this ‘European premiere’ were presented at a Deutsche TV Platform meeting earlier this week.

The pilot was organised by the German TV Platform in cooperation with IRT (the technology institute of the German public broadcasters), Hessischer Rundfunk (HR) and BMW (on behalf of the Association of the Automotive Industry, VDA).

Dr. Torsten Koehler reported on the work by the HR and said the new process “is in principle suitable for the successor standard DVB-T2,” and therefore “highly suitable for the future.” Dr. Bertram Hock, director of development broadcast receivers at the BMW Group, described the development as “very promising”.

Digital terrestrial television (DVB-T) is available almost everywhere in Germany and enjoys great popularity. Among the more than 36 million in the German market existing DVB-T receivers (according to GfK research) there are also many devices for mobile reception. For coaches, cars and campers digital television has long been the standard. And many people use DVB-T in connection with portable devices such as USB sticks, laptops and GPS systems to watch television on the go.

When on the move, the reception changes between different transmitters with different frequencies. This still requires a manual switch or a new channel scan. To solve this problem and simplify the mobile reception of TV channels in Germany the broadcasters and the automotive industry have developed the so-called handover method for DVB-T reception on the move. Using additional signalling, receivers will automatically tune in to the best available signal of a channel, a method reminiscent of the RDS signal for FM radio stations.

(The picture shows a built-in TV tuner from Volkwagen)

Wi-Fi 6 and Wi-Fi 6E client devices are entering the home in an unprecedented way, surpassing 50% market share since their introduction in 2019 (compared to four years for Wi-Fi 5). … END_OF_DOCUMENT_TOKEN_TO_BE_REPLACED