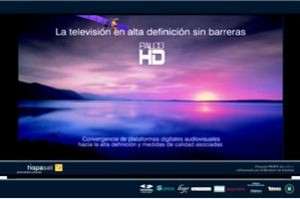 The Spanish Palco HD TV consortium, lead by Hispasat, has unveiled its plans for a combo satellite and terrestrial receiver which aims to promote HD television in the country.

Various manufacturers will bring combined DVB-T/T2 and DVB-S/S2 receivers to the market, while satellite operator Hispasat has taken the role of distributor of HD channels. At the moment, the operator broadcasts 35 HD channels, as well as two 3D channels on its platform.

It is remarkable that the Palco HD box only combines terrestrial and satellite reception and does not seem to have internet access for additonal services such as VOD and catch-up TV, especially as other players on the market including Vodafone and Telefonica have hybrid boxes available combining terrestrial reception with IPTV or web access.

Meanwhile, Hispasat is now leading the project Palco HD2, whose main objective is to continue with the validation process and development of the technologies applied in HD enabling commercial development of HD services in Spain. The project takes as a starting point the conclusions taken from the Palco HD activities in the previous phase.

Wi-Fi 6 and Wi-Fi 6E client devices are entering the home in an unprecedented way, surpassing 50% market share since their introduction in 2019 (compared to four years for Wi-Fi 5). … END_OF_DOCUMENT_TOKEN_TO_BE_REPLACED