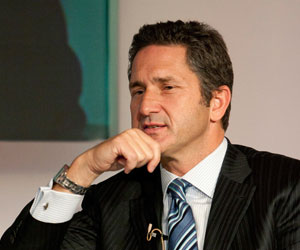 Talking to the Swiss Sonntagszeitung in a pre-Cable Congress promotional push, Fries said “In the future you can network all possible devices in the home and watch TV with them. No matter if it is a smartphone, iPad, or computer – wirelessly. We are introducing a whole new viewing experience. We call it “TV anywhere”. Also, you will have access to web content on the television. There is also a unique new navigation menu and intuitive operation. In short, we create a comprehensive multimedia centre for your home.”

Fries believes the Horizon box will provide enough ammunition to fend off Google TV and the likes of Apple TV: “It doesn’t give me sleepless nights. Google TV is still under construction. The content offered and the ease of use are unsatisfactory. The same is true for Apple TV. But I agree with you: we must also move in order not to lose our market leadership.”

Fries is confident about the future of cable, “As a cable network operator, we are strong when it comes to very high-speed networks and attractive television content. In contrast to the internet television has so far been a closed system. It was limited only to the TV set.” The new Horizon box is intended to change all this and open up web content to the TV set as well as act as a hub in the home.

The introduction of the new set-top box will of course mean an exchange of all the legacy boxes in the home. “This can not be avoided if you’re upgrading to the new platform. However, in the future only one box will be required instead of several for different purposes. We combine the digital TV receiver with a hard drive, the cable modem and a wireless station in a single product. This saves space and simplifies operation.”

As reported previously in Broadband TV News, Horizon will first be introduced in The Netherlands, to be followed by Switzerland. “I am currently looking at the market in Switzerland in the first half of 2012 as realistic.”

Wi-Fi 6 and Wi-Fi 6E client devices are entering the home in an unprecedented way, surpassing 50% market share since their introduction in 2019 (compared to four years for Wi-Fi 5). … END_OF_DOCUMENT_TOKEN_TO_BE_REPLACED