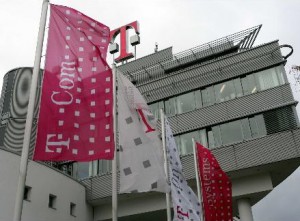 Sky Deutschland and Deutsche Telekom are about to close a deal to offer a complete TV package to headends of housing associations and city networks, according to a spokesperson from Telekom. With the combined offer, the incumbent telecom operator hopes to better compete with the triple play offer from cable operators.

“We are very close to an agreement,” according to a Sky Deutschland spokesperson. The agreement would put an end to the stalemate position between the two companies.

Now, Telekom is teaming up with Sky to re-enter the traditional TV distribution business. “We want to throw sand in the wheels of the cable operators,” according to Marc Sausen, spokesperson at Deutsche Telekom. The proposed joint venture plans to offer a wholesale package, consisting of a basic bouquet of channels, as well as the Sky premium channels offer, directly to housing associations and city nets.

At the moment, most housing associations are supplied by the traditional cable operators. The German TV distribution market has two levels, with level 4 reaching into the consumers’ homes. The distribution networks are level 3. Housing associations have level 4 access, cable operators are level 3 and have been buying up level 4 access during the past few years in order to directly reach their customers rather than via wholesale contracts.

The agreement between Telekom and Sky is remarkable, especially in view of the recent spat between the two companies over the distribution of Sky channels over Telekom’s Entertain IPTV service. At the moment, Sky and Entertain are in competition with each other with their own Bundesliga football live coverage.

But both parties seem to need each other: Telekom needs to offer a full TV package that is able to compete with the digital TV services of the cable networks, while Sky needs to increase the number of subscribers. The pay-TV platform needs every distribution platform it can get. On December 31, 2010 there were 2.6 million Sky homes. At the moment, Sky has only an agreement with Kabel BW in place with talks still going on with Kabel Deutschland and Unitymedia.

Wi-Fi 6 and Wi-Fi 6E client devices are entering the home in an unprecedented way, surpassing 50% market share since their introduction in 2019 (compared to four years for Wi-Fi 5). … END_OF_DOCUMENT_TOKEN_TO_BE_REPLACED