Liberty Global chief strategy officer Shane O’Neill has given attendees at the annual TIF conference at Dublin Castle the first glimpse of the Horizon Connected Home Gateway, scheduled for deployment across the UPC network during 2011.

O’Neill outlined the various connected and hybrid TV options already in the market such as Boxee and Google TV. “On the face of it Google TV looks like a threat, but in reality the cable industry will do what it has always done, and try to embrace innovation developed elsewhere and incorporate it into its own service. I think there’s a very strong likelihood that you’ll see the cable industry embed Google television and that functionality into its own set-tops, so that it’s not a threat but a cool new way to search for video”.

Explaining that the new box would bring a marriage of linear TV and the internet, O’Neill said that multiple screens had meant the social aspects of TV had disappeared, but that the social networking features included in the UPC Horizon box would go some way towards restoring this. “We won’t necessarily watch together, but we will discuss it on the television, through Facebook”. 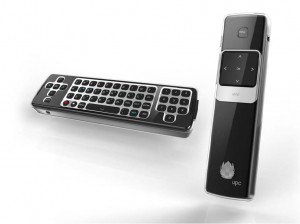 Showing delegates a picture of the remote, O’Neill likened the device to Apple TV with only four buttons for navigation and a QWERTY keyboard on the reverse. The sleek black Samsung form factor has rounded triangular edges and a light grey LED display at its centre.  Horizon will enable the consumer to do four key things; to access the internet as well as the pay-TV offering; to enable to stream content downloaded on the PVR throughout the house; it will enable any content held on a PC or other devices to be viewed on the main TV. Navigation, which O’Neill said UPC was becoming increasingly obsessed with, comes through the NDS Snowflake UI.

O’Neill, who is also the deputy chairman of UPC Ireland, said the device would be available in Ireland during the summer of 2012. The Netherlands and Switzerland have previously been named as the initial markets for Horizon’s deployment during 2011 with Germany (Unitymedia) and Austria to follow.

Wi-Fi 6 and Wi-Fi 6E client devices are entering the home in an unprecedented way, surpassing 50% market share since their introduction in 2019 (compared to four years for Wi-Fi 5). … END_OF_DOCUMENT_TOKEN_TO_BE_REPLACED