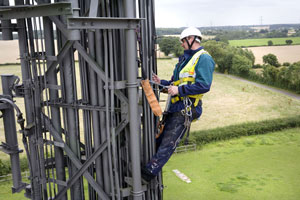 UK transmission company Arqiva is working on a terrestrial 3D test using the Service Compatible format favoured by public service broadcasters. Initial transmissions would be conducted outside of London to a closed user group. Arqiva has confirmed to Broadband TV News that following a series of internal tests, it was currently seeking rights clearance for some selected 3D content, though an initial licence application was already with Ofcom.

“What we’re trying to do is understand the techniques that we would have to employ and make to work if the BBC want to go down this route. With the digital dividend it may be that we have more T2 networks in the future and they may well want to do 3D if it is established by then and there is sufficient volume of 3D displays out there,” explained Mike Brooks, Arqiva’s head of technical development, DVB-T2. “The T2 network that we’re rolling out [in HD] is for a specific customer, the BBC’s public service multiplexes, so in terms of what the BBC are going to do that would be a question for them.”

“As you look at the technology development, Sky has generally lead with PVRs and set-top boxes, so what we want to do is to start look where we need to develop some of the Freeview-type services,” said Steve Holebrook, managing director, terrestrial broadcast, Arqiva. “Sky’s methodology of deploying this is right for them. They’ve got lots of bandwidth so they can broadcast a completely separate signal and take up the bandwidth that’s there. In general terms, Freeview has a degree of constraint on bandwidth, so we’re looking at different techniques that still allow us to deliver the same types of service to the customer but in a more efficient way.”

Service Compatible broadcasts a regular high definition signal to all viewers, while using additional data to complete the picture for those homes with a 3D display.

Holebrook confirmed that a number of tests had already been conducted “on the bench” and the next stage was to look at doing this over the terrestrial network. “We’ve been able to look at 2D plus Delta, which is significantly more efficient from a bandwidth perspective, which is vitally important for a DTT-type service, we’ve shown it working on the bench and think we can deploy it on a DTT network”.

Earlier this week Danielle Nagler, the BBC’s head of HD and 3D, told the 3D Masters conference that the BBC is looking to capture both the opening and closing ceremonies of the London Olympics, along with selected events, in the 3D format.

Any 3D coverage would have to be discussed with the BBC’s fellow members in the European Broadcasting Union (EBU) and would ultimately need to be approved by the host broadcaster, Olympic Broadcasting Services (OBS).

Brooks said that the present ‘spare’ bandwidth within the UK’s only DVB-T2/MPEG-4 multiplex would be insuffcient for the additional 3D data required under the service compatible format.

Wi-Fi 6 and Wi-Fi 6E client devices are entering the home in an unprecedented way, surpassing 50% market share since their introduction in 2019 (compared to four years for Wi-Fi 5). … END_OF_DOCUMENT_TOKEN_TO_BE_REPLACED