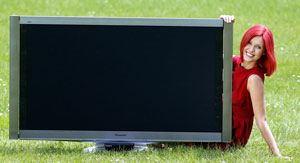 Philips is showing a 3D version of its super widescreen 21:9 cinema television set, requiring the use of special passive glasses.

Sony has even announced it will bring LCD sets to the market, which require the use of so-called active ‘shutter glasses’. The company also plans to integrate 3D into its PlayStations and Vaio notebooks.

At the Panasonic stand, viewers can see a 3D trailer of the upcoming Avatar movie, which will hit theatres during the Christmas season. The Japanese manufacturer is showing 3D sets using its plasma display technology and also requires the use of glasses.

The Blu-ray Disc Association (BDA) said it will issue specifications for 3D before the end of the year to make it an integral part of the BD standard.

In spite of the product announcements by both Panasonic and Sony, a 3D standard is still a long way off, with three systems vying for the honour. According to Andrea Ragnetti, CEO Philips Consumer Lifestyle, the best changes are for a system not requiring glasses. But it is too early for 3D, he said. “The technology is not yet stable enough.”

“3D has been the engineer’s dream for years,” he said, but Philips will wait to see “what the consumer wants”. Philips has been showing prototype 3D TV sets for a number of year, including one which can be experienced without the use of glasses. But late last year, Philips announced it was putting plans to further develop 3D on hold due to lack of interest from the market.

The three systems under development at the moment are one requiring passive glasses, one requiring active ‘shutter’ glasses and the one without glasses. Philips has been demoing the latter for a number of years.

Wi-Fi 6 and Wi-Fi 6E client devices are entering the home in an unprecedented way, surpassing 50% market share since their introduction in 2019 (compared to four years for Wi-Fi 5). … END_OF_DOCUMENT_TOKEN_TO_BE_REPLACED